Uganda – Progress on Sanitation as Disease Spreads near Refugee Site

Posted on August 7, 2012 by lwfworldservice

Refugees from the DRC smile with their water collection vessels near their new borehole in Mahani village. Image courtesy Alison Thurston / LWF Uganda

1. Brief description of the emergency
Conflict continues to drag on in the Democratic Republic of Congo, where M23 rebels are still inflicting violence on civilians. M23 forces are wrestling with the Congolese army for control of the country. On July 30th, The Guardian reported that army forces and M23 fighters are currently battling in East Congo, near the Ugandan border. The UN has deployed over 17,000 peacekeeping troops to the Congo thus far, but rebel forces have been able to take several new towns in the past week. Though the UN reports that over a quarter million of Congolese people have already been forced to leave their homes, the fighters are now demanding that Rwandan president Joseph Kabila step down before any negotiations can occur. President Kabila began official talks with Ugandan president Yoweri Museveni on the security situation on July 30th , as the war is drastically affecting both countries.

At the Rwamwanja Resettlement Site in Kamwenge District, the latest count of refugees from the Democratic Republic of Congo is now 18,110, with many more new arrivals expected in August. With such large numbers of people in a very small space, sanitation continues to be of the utmost importance in the camp.

Recent reports have emerged about disease in Western Uganda that has caused concern among LWF and camp officials. A recent outbreak of Ebola virus has occurred in Kibaale District, just 95 kilometers away from Kamwenge District, home of the Rwamwanja site. With such a close outbreak of disease, organizations working in the area of currently considering evacuating their staff to a different region, to protect them from unnecessary risk of infection. Ebola virus has killed 14 people in Kagadi Hospital in Kibaale. There is no treatment or vaccine for Ebola, which is passed along by the kind of close personal contact that is unavoidable in a place as densely populated as a refugee camp. Ebola kills up to 90% of those infected, though its fatality depends of the strain contracted. The virus killed 425 Ugandans during an outbreak in 2000. Residents of Kibaale are currently fleeing the area to avoid infection, which potentially exposes more people to the virus.

In addition, a cholera outbreak occurred in July among refugees from the Congo, though no deaths have been reported. Cholera is an infectious disease that spreads through food and liquids exposed to faeces from an affected individual. It is especially strong in areas with poor sanitation, much like Ebola.

2. Impact
With malnutrition affecting 38% of children in the Rwamwanja camp and 11% of children in the transit center at Kisoro, this population is especially vulnerable to disease. The number of water sources in the site has increased, but refugees continue to have inadequate access to water. LWF, with this support from ACT alliance will continue to contribute to remedy this situation.

Furthermore, due to scarcity of resources and the poverty of those living in the camps and around the villages, there continues to be an acute lack of adequate sanitation practices and competition over some water sources in the area. LWF has mobilized water and sanitation committees and will continue to train individuals and groups in sanitation and in group mediation.

3. National and international response
UNHCR and the Office of the Prime Minister continue to be the main actors in coordinating the response to the refugee crisis. UNHCR and OPM operate in both the transit center and settlement site while OPM is the direct implementing partner at the resettlement site. Some new agencies have begun working in the sites in the last week of July. Other agencies involved include:

The Uganda police and the army continue to be heavily deployed to avert any security threats.

Water:
The Lutheran World Federation (LWF) Uganda Programme with Rapid Response Fund drilled eight (8) boreholes in the refugee settlement. Four (4) wells were operationalized in July, in four (4) communities. The remaining 4 are currently being fitted with handpumps. LWF will be drilling two (2) more wells in August, bringing the total number of wells created by the organization to ten (10). The averaged drilled depth is 96 meters and with an average yield over 1000lts/hr. 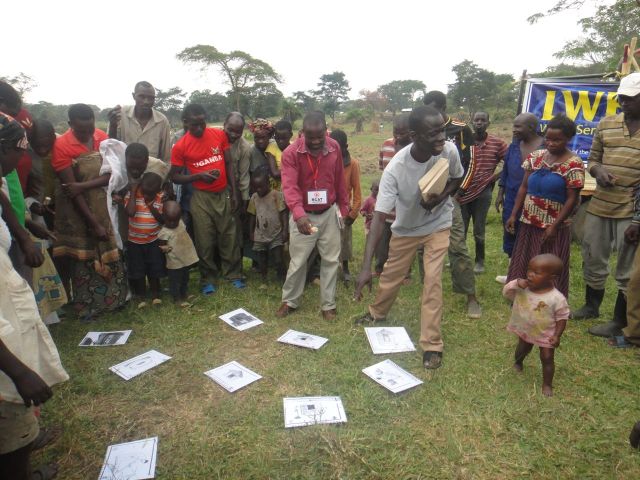 Sanitation:
LWF previously distributed latrine digging kits, and is now conducting follow ups with those who received tools. Its priority in sanitation is currently fencing and creating soak pits for boreholes, though latrine follow ups will begin in earnest in August. LWF is also encouraging the water and sanitation committees of various villages in the site to manage and maintain boreholes. Committees are currently fencing some boreholes and will be mobilized to take other actions to maintain the sanitary conditions of their boreholes. LWF will conduct an official training in August on the best practices for maintaining wells. IOM will be distributing plastic slabs for latrines, and LWF will be identifying families ready to receive and utilize them.

5. Planned activities
LWF’s continuation of the following activities depends on its financial support. Its top priority is operationalizing its ten (10) boreholes, with sanitation and livelihoods being secondary priorities. In collaboration with the Uganda ACT alliance Forum and the implementation partners in the refugee resettlement, LWF will continue to implement its proposal geared towards supporting the refugees through the following activities:
• Increase the availability of water (drilling for new source)
• Support of incentives for water and sanitation promoters
• Hygiene and sanitation education sessions and campaigns
• Construction of drainable pit latrines
• Livelihoods and food security support for refugee households
• Peace building and conflict resolution (Uganda Joint Christian council and Church of Uganda
• Community dialogues and inter-cultural events (Uganda Joint Christian council and Church of Uganda)

This entry was posted in Emergencies. Bookmark the permalink.