Posted on August 31, 2011 by lwfworldservice

The LWF Ethiopia operations in Dollo Ado camps are working round-the-clock to stave off an acute health crisis in the camps in Dollo Ado with the provision of water and santiation activities. Doing so is one of the most difficult tasks considering the over population and culture and tradition of the community. The three camps (Boklamaio, Melkadida and Kobe) are filled to capacity with the fourth one (Helawen) also quickly reaching it max, with still incoming civilians who have fled from drought, famine and conflict in neighbouring Somalia. During the day the heat is stifling. At night the winds are strong enough to overturn makeshift dwellings and cold enough to give a child pneumonia or worse.

The number of refugees entering Dollo Ado has dropped to 50-150 people/day during the month of August. There are speculations that this could be due to emergency response in Mogadishu. Others suggest that the influx may resume after the end of Ramadhan (Muslim fasting period). The total number of refugees as at now stands at 120,000 people. 200 Refugees are in the Reception Center waiting for screening – a pre-registration process conducted by ARRA (Administration for Refugees and Returnees Affairs). After pre-registration formal registration takes place, jointly, by ARRA and UNHCR, which takes a day or two, depending on the number of influx. Right after the registration, the refugees are transported to a Transit Center, some 7.7 Kms away from the reception center, where they will stay until they are relocated.

Currently, the Transit Center has 7000 refugees waiting to be relocated to the newly opened fourth camp (Helowen), about 40 kilometers away. Two weeks ago, the number of Refugees staying in the Transit Center was 14,000 in a heavily overcrowded situation. The newly setup camp, Helawen, has a capacity of 40,000 Refugees, it being divided into two, Camp A and Camp B. LWF is setting up its sub-office in this Camp to implement sectoral activities namely: environment, livelihood, Youth and Adolescence life-skill training in Kobe and Helawen. LWF is further requested by UNHCR to build two primary schools in two camps, Helawen and Melkadida, with HCR funds. Negotiations are still on-going to finalize the agreement.

At the time LWF began intervention, mid July, there was acute shortage of water at the Transit Center, caused by the increase in the number of refugees, and limited capacity of the hand-dug well and its solar power. 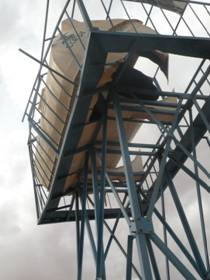 As a matter of priority, LWF upgraded the pumping capacity with a provision of a new generator, as well as, began water trucking. LWF also replaced a damaged reservoir (see photo) and raised the quantity of pumped water to the two reservoirs from 25,000 liters/day to 40,000 liters/day. Both UNHCR and LWF also used additional trucking system to overcome the serious shortfall.

As of last week, the water trucking system to the transit center has been reduced from seven trucks of 18,000 liters a day (4 by UNHCR and 3 by LWF), to one truck a day by each organization. This is partly, because of the Refugee relocation to Helowen camp and partly, the increase in the amount of pumped water.  The water distribution ratio at the Reception Center is more than 25 liters of water/person/day whereas; at the Transit Center its 15.71 liters/person/day.

LWF and NCA Joint Drilling Agreement: LWF and NCA have currently signed an MoU to drill 5 boreholes – 1 in the transit camp, and 4 in the camps, to meet the acute water needs. LWF is grateful to NCA for making its rig available for this operation at a time when water shortage for human consumption is critical. The resources for this operation came from the generous donations through ACTAlliance and bilateral funds from Christian Aid (Band Aid). It is to be noted that water supply to the camps is complementary to the works done by Oxfam GB and International Rescue Committee (IRC). According to ARRA and UNHCR reports the water coverage in the camps is still in deficit, the supply ranging from 10-13 liters/day/person as compared to the minimum standard 15lt/d/p accepted for emergency situations.

The drilling rig and technical team have reached Dolo. Site clearing and test drilling is done to commence work on the first borehole. The drilling option is awaited with anticipation, as the purification system serving the camps has begun developing silt and water is provided by means of trucking which is rather expensive.

Furthermore, in fear of Cholera outbreak which had recently been reported in Mogadishu, Somalia, LWF in collaboration with UNHCR conducted a two day (August 24-25, 2011) Sanitation/Hygiene awareness raising campaign at the Transit Center. Through the “Hand-Wash” and “Jeri-can Wash” campaign two thousand five hundred soaps and a number of posters had been distributed. Refugees were also given training on personal hygiene management.

Progress in Other Sectors: Water was the most pressing need in Dolo, next to food. While food and nutritional supplements are provided by WFP and other NGOs, LWF took up the water need as a matter of urgency. At this stage, all the other sectors (Environment, psychosocial relating to youth program, and Ed. facilities) are under preparations to begin by next week. Staff Teams are in place and materials needs for these sectors are being procured.

Needs for the program

We would like to sincerely thank you (all our Supporters) for your generous gifts given to our work in Ethiopia. All funds received are immediately channeled to the activities implemented on the ground.  So far we have raised just over USD 2.6 million of the funding requested under the LWF part of the Dolo Addo / Ethiopia appeal. We hope for your continued support – every contribution makes a big difference!

This entry was posted in Emergencies, Somali Refugee Crisis 2011. Bookmark the permalink.