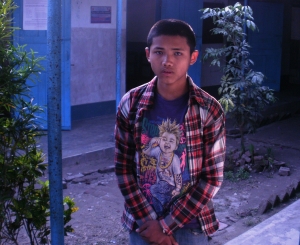 Bimal Gurung a Bhutanese refugee living in Beldangi I camp in Jhapa, one of the two eastern Nepali districts, which has been hosting Bhutanese refugee since 1990 is a Grade 9 student who is fond of drawing, writing stories, poems and songs.  However, his involvement with a local gang not only jeopardized his talent but was ruining his career as a student. He bunked almost all the classes. Teachers in his school would hardly recognize him. His habit of smoking added to his mother’s worries.

He was also a short tempered child often hitting his own brother whenever he drew something similar to his. “I thought I was the most talented and clever person in my friend’s circle. I used to do bad things” Gurung tells about his past.

Bhutanese Refugee Children Forum (BRCF), through the Child Protection Watch Group (CPWG), a child peer group that was formed by Lutheran World Federation (LWF) Nepal in 2008 with the support of DanchurchAid (DCA) noticed Bimal’s misbehavior and the peer group informed that to the BRCF. Bimal was then invited to join the training on Child Rights Convention (CRC) which oriented him about rights and also potential harm to children.  It also trained him how to report cases of harm and how children can stay safe from risk. Gurung who was reluctant to join the BRCF at the beginning says, “If I had not joined the group, I would have never got a new life.”

Now, instead of hitting his brother, he assists him to paint. “I am proud that my brother’s excellent drawing is displayed in the classroom.” According to him when he gets angry, he usually leaves the place, washes his face, sprinkles water on his head, and listens to music to manage his anger. “Feeling cool makes me feel better,” he adds.

His mother now feels proud that he assists her in household chores. He gave up smoking and dropped out of the gang. “I felt great when I managed to convince some of my friends to permanently quit bad activities, like smoking and getting into fights.” According to him the gang in which he was involved in the past no longer exists.  Now he started to attend all the classes regularly. “I went to my teachers’ office, apologized for my past irresponsibility and promised to continue the class in future. Many thanks to BRCF, which helped start new life with bright future.”

LWF Nepal provides care and maintenance support to about 80,000 Bhutanese refugees residing in five camps in eastern Nepal. The refugee population are served with Water Supply, Sanitation and Hygiene (WASH) facilities, camp infrastructures and with food and non-food items. LWF Nepal provides strategic inputs to United Nations High Commission for Refugees (UNHCR) and other partners assisting Bhutanese refugees in developing a reach out strategy for managing the refugee camps. LWF Nepal with support from UNHCR has been managing camp consolidation and effective use of vacant plots following the resettlement of 40,443 refugees to third countries by the end of 2010.  LWF Nepal with funding support from World Food Program (WFP) supplies all essential food items to the refugees in the camps by following Sphere standards.